What springs to mind when you think of the Isle of Wight? Queen Victoria’s holiday home? Home of the world’s biggest yachting regatta Cowes Week? Well, for Forge it’s the now annual trip to the UK’s very own sub-tropical (some of the time) cycling mecca.

The island has a long association with cycling, from the Isle of Wight Classic back in the ‘70s and ‘80s, raced by legends such as Sean Yates to the present day, hosting the final stage of The Tour of Britain in September 2022. And after last year’s successful trip, even more Forge riders travelled on Saturday 9th July to do it all again, but this time with the added excitement of riding some of the roads (and non-roads – more on that to come!) the pros will be tackling in the Tour of Britain.

Out of Cowes we were soon enjoying the open countryside as we ventured inland to tackle the first of the gravel sectors. Think Strada Bianchi combined with the dead straight tunnel-like Trouée d’Arenberg from Paris-Roubaix – well that’s what we imagined as we channelled our inner van Baarle and Longo Borghini. An awesome, but challenging part of the route (most of us enjoyed it anyway) which will be an amazing spectacle on the Tour. A few Strava cups were even achieved, which will surely be gone as soon as the pros fly through in September.

First stop of the day was fast approaching, but before lunch, we had to tackle the real first climb of the day known as Bully’s Hill – a 2km climb with a beasty initial spike of 10.2%. The climb then settled into an average gradient of 4.5% where the riders were welcomed to a stunning countryside vista point at the top. Descending past The Garlic Farm, we arrived at Pedallers Cafe, a great little spot, well equipped for cyclists with lots of outdoor space. Lunch was served.

Refuelled and rehydrated, the Forgers settled into the next stage of the ride which continued to be rolling hills with the occasional steep kicker to get over to the south-west side of the island. This part of the route revealed more stunning sea views and also featured a trip down to St Catherine’s Lighthouse, which felt more like Santorini than the Isle of Wight. Some great team pics and selfies just about made up for the 7% footpath climb to get back onto the road. It’s all good training, right?

Coffee stop number two approached at the 95km mark for the F3 groups and 71km for the F2 group. We stopped at either the Tandem Tea Room or Brighstone Village Shop, both in picturesque Brighstone. The former a quirky little place where the owner had baked banana bread and blueberry muffins for our sugar craving riders, and the latter a delightfully welcoming spot complete with complementary bike locks, iced water, and even a laptop for our South African contingent to watch the start of the rugby. Big kudos all round.

Feeling refreshed with full bidons, we settled into the last section of the ride which treated both groups to the same flowing roads home. The rolling hills settled 20km to the finish and the route started to flatten out. With the wind on our side, the groups picked up a good pace for the final leg back into West Cowes. Shout out to Pete D and Tim H of the F3 group for powering out big stints on the front, towing the group back in. The Mental Fortitude of the Day award goes to F2 rider Sue E for proving once again that no hill is too steep.

All groups then met back at the final watering hole…the Woodvale pub. Where beers, Strava stats and tan lines were discussed. Another brilliant, successful trip to the beautiful bike friendly island for Team Forge. Specials thanks to Anna B, Luke M and Andrew T for making the trip such a success. 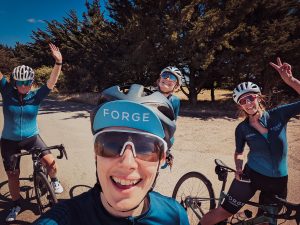 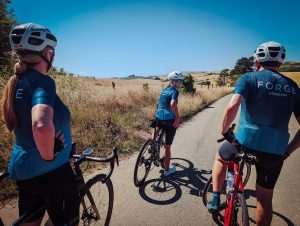 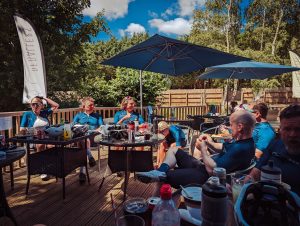 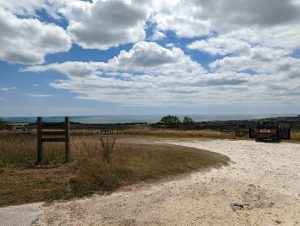 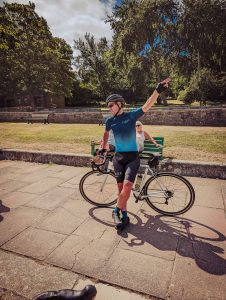 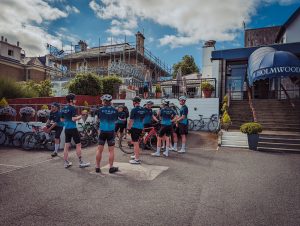 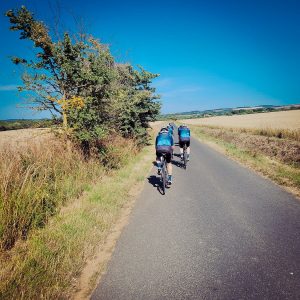 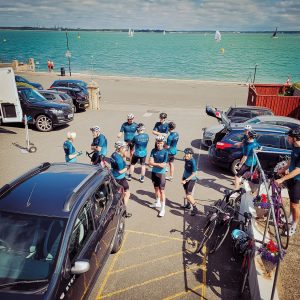 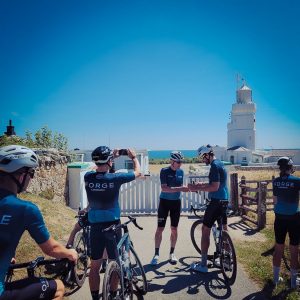 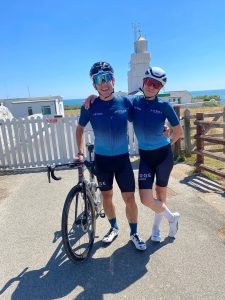 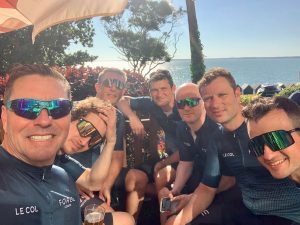 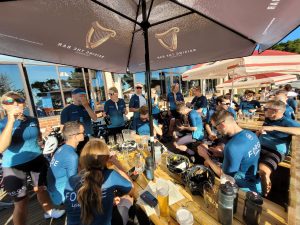 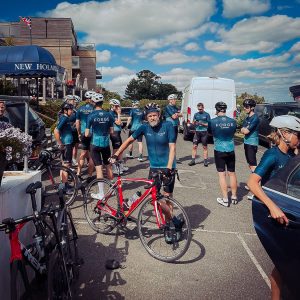 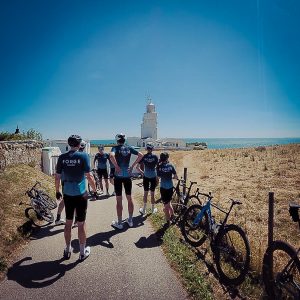 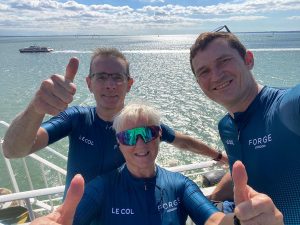 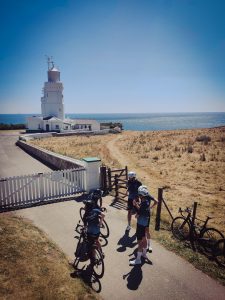 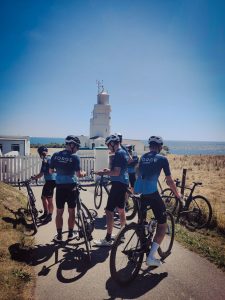 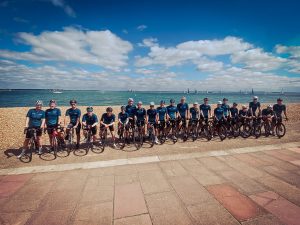 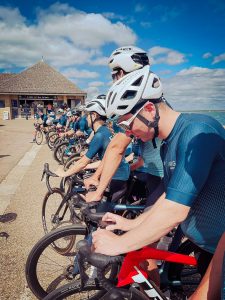 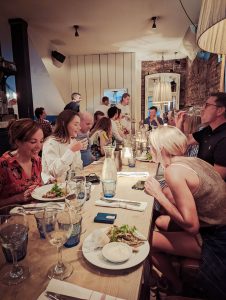 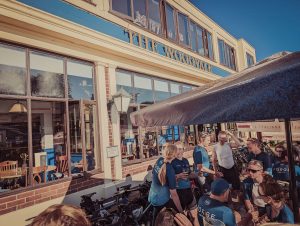 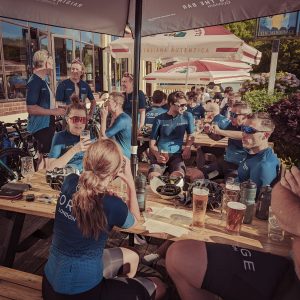 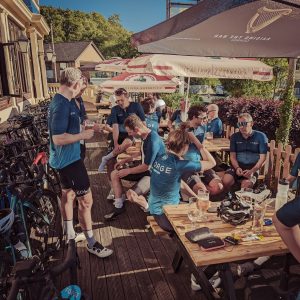 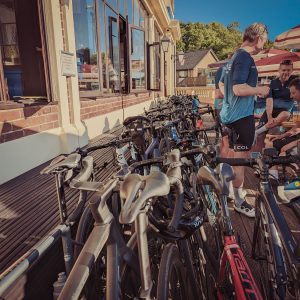 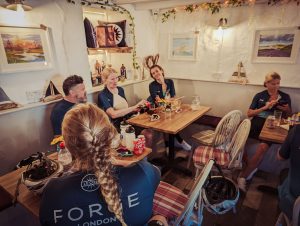 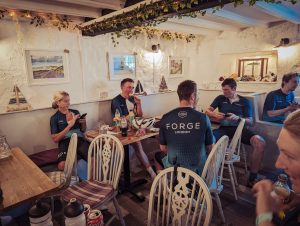 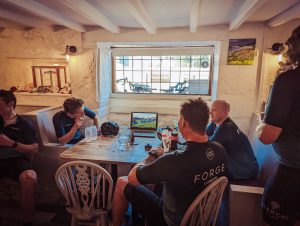