Wales of a time

A brave Forge force made up of 14 riders, made the trip to South Wales on 20th June to battle one of the UK’s toughest sportives…The Dragon Ride.

After gathering the previous evening for carb loading, the Forgers settled on a start time of 7:30am, rolling out as a group in the lovely Welsh sunshine, taking on the first 45km and tackling the first two climbs of the day – Sardis Hill (1km at 5.5%) and Glynneath Hill (3.2km at 5.4%). Just a little teaser to ease the riders into a long day in the saddle.

At kilometre 45(ish) the route then split and the groups for the day were formed. Passing friendly locals, brilliant feed stops with catering on near-empty roads of the Brecon Beacons, the climbs kept on coming.

Next up was Black Mountain. Featured in the recent Women’s Tour of Britain, 5.3km at an average of 5.8%, saw lines of riders snake up the road long into the distance ahead of us, all against a backdrop of amazing verdant scenery. The Gran Fondo group were expertly paced up the climb by the metronomic Jon E, until he dropped us near the top. But the effort was most certainly worth it, we were rewarded with amazing summit views, and then a glorious, fast sweeping descent.

Two variations of Bwlych followed, just keeping us ticking over until the intimidatingly named ‘Devils’ Elbow’. With a savage 10% average gradient (hitting 17% at points) over 1.8km, the organisers closed the road and set up timing for riders to battle it out for King and Queen of the Mountain.

And battle it out they did, with our own Bex C achieving an amazing top five spot overall in the QOM rankings and Tom B posting the 22nd fastest time for his age group up the brute of a climb. Remarkable, given Tom’s nasty accident only two weeks prior and riding a borrowed bike. Step aside Allaphilippe and Rousse, this is cycling’s new power couple, ‘Bosh and Bex’.

The weather held out as both groups then took on the final two climbs of the day. The legendary Rhigos sits No.98 in Top 100 Greatest Cycling Climbs (5.6km at 4%) and Tour winner Geraint Thomas states in his book The Mountains According to G, “one cannot consider themselves a proper rider in South Wales until they have conquered it”. So guess we can call ourselves ‘proper riders’ now. We didn’t even stop at the ice cream van at the summit.

A final sting in the tail presented itself in the form of The Bwlch (5.9km at 5%), a tough but enjoyable ascent after 180ish kms in the legs, despite a couple of switchbacks and false summits fooling us we’d reached the top.

Both amazing climbs, showing off the incredible views of the Welsh sweeping scenery and rolling countryside at both of the summits. A perfect opportunity to capture some photos in memory of the conquest!

The riders then took on the long descent back down into Port Talbot, crossing the finish line in the event village, where they were welcomed by medals, beers, food and live music. A great day out in the Welsh mountains with the Dragons well and truly slayed. 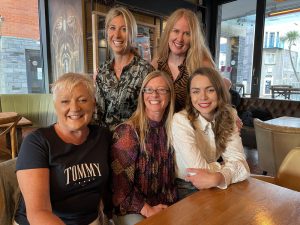 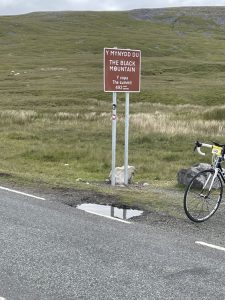 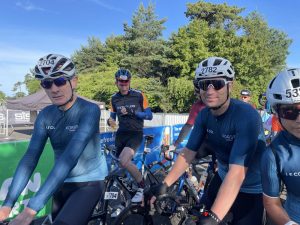 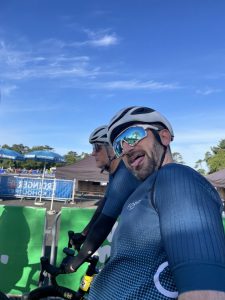 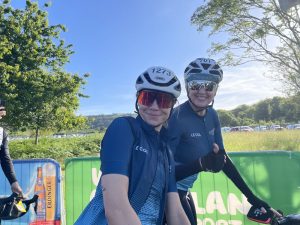 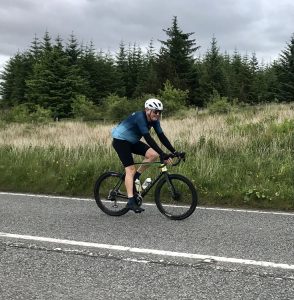 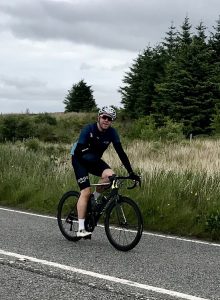 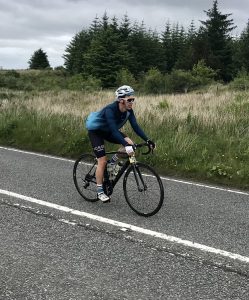 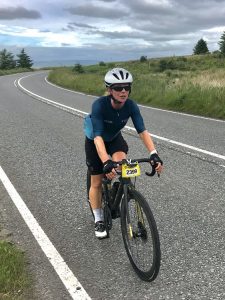 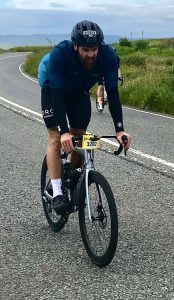 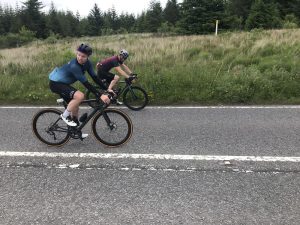 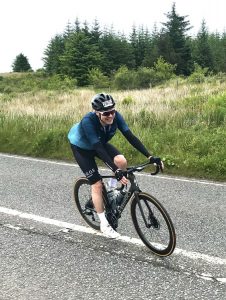 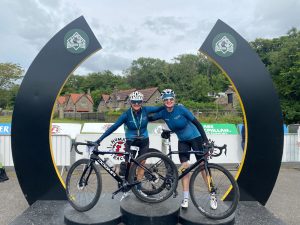 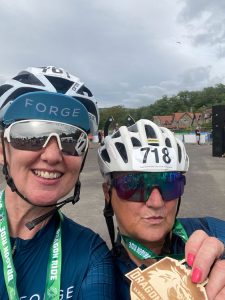 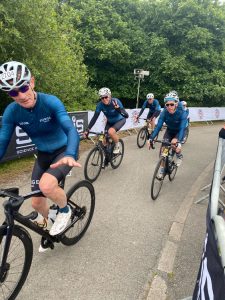 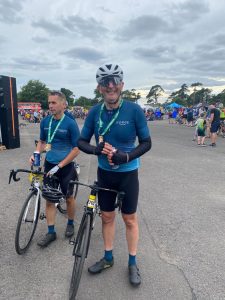 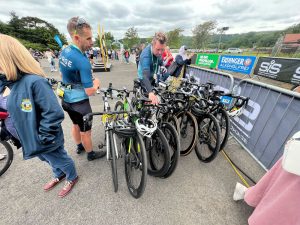 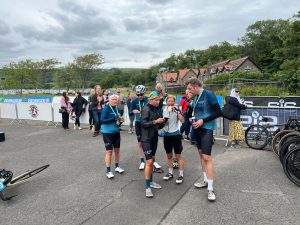 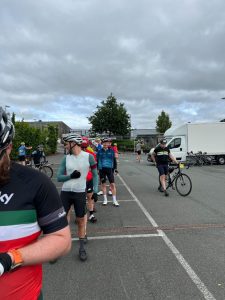 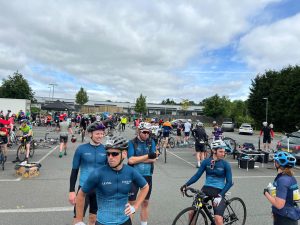 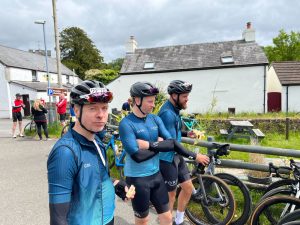 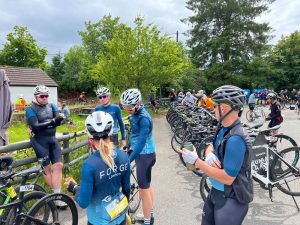 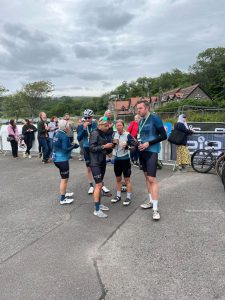 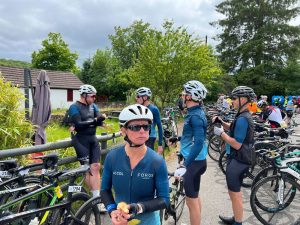 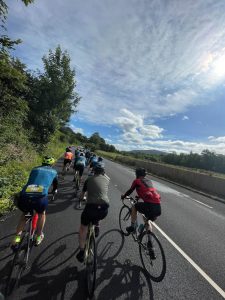 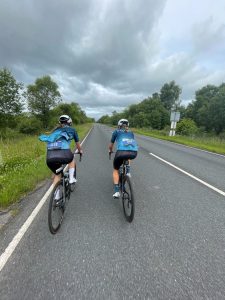 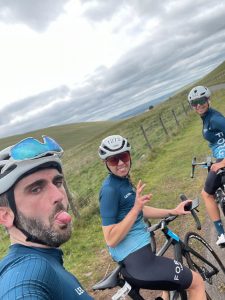 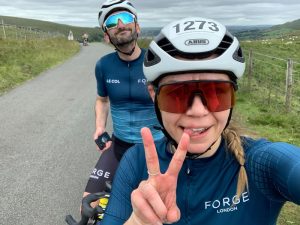 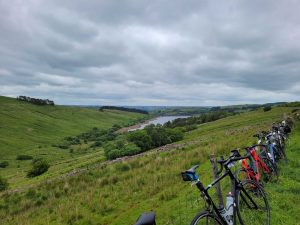 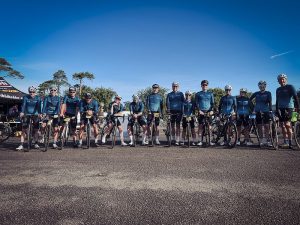