Ruben Q is Forge’s man of steel after he smashed his personal challenge of competing the full distance Ironman course in Gdynia, Poland in August – and within his best target time too.

In what is probably the toughest one-day event in the world, our Spanish conquistador completed the mind-boggling swim, bike, run triathlon in a stunning 11hrs and 4minutes.

So, we sat down and asked our senor citizen about the sweat and tears involved and what motivated his personal challenge and the small part Forge played in helping him get there.

“Always since I started as a triathlete, I was thinking of doing long distances” he explained, as he recovered with his feet up back in Kingston.

“In 2021, I had to re-think my plans after many triathlons were cancelled because of Covid but I was determined to challenge myself with something bigger like a full Ironman. It is a distance every triathlete has to do once in a lifetime!”

And why Poland? “Really good question. As it was going to be a great challenge so why not look for something that suited me.

“First thoughts were something in the middle of the season, not very hilly so something with a rolling course because on that long distance it is not possible to have a flat bike course.

“Also, I had a very bad experience on an open-water swim in a Barcelona triathlon, so I was looking for a bay or lake with calmer waters and somewhere with an easy run.

“Poland was not an easy run, but the bay waters and bike course ticked the boxes. Also, the weather in Poland was amazing with maximum temperatures of 23 degrees and minimum of 13 degrees great for a long day racing.”

How long have did you train for it? “A long time, it is difficult to say really, since I have been training for the half Ironman I did not stop, so I would say two and a half years, although I will say that the last three months were the hardest, trying to build it up in distance terms.

“I was alternating speed and short sessions with long and steady session in all three disciplines, swim – bike – run. The thing I would like to say is how important it is to be consistent and flexible on every training session – your body will tell you where you are.”

How did Forge help you achieve your goals? “The Forge Family! A big shout to all. The bike course (180km – solo) would not have been completed without your help. Thursday rides with tempo efforts make you push yourself to the limit and force you to think where you are, where your limits are and then control yourself to finish the ride however long the distance.

“Also the Sunday longer rides into Surrey hills – my favourite place – were very helpful to test nutrition. And the icing on the cake, that beautiful trip to Girona riding for four days in a row up and down the mountains made me stronger.”

“Of course, on the start line I was nervous, even I cried a little bit before the swim, not because I was afraid of it, it was because I was doing something that I was waiting for so long and the dream was to finish it.”

Talk us through the swim. “The swim! One off my strongest disciplines, I enjoy it a bit too much. Before the swim the rain stopped 15 min before the start and as 3,800 meters is a long way, I was controlled, focused on saving energy for the bike and run. The swim was completed in 1:05:38, similar time I was doing in my training and right on my target.”

180km on the bike solo – we at Forge may know what that is like. But how did you concentrate for so long averaging more than 31kmph! Any bad moments? “It was solo! no drafting allowed, so it was an adventure.

“From the moment I grabbed the handlebars my mind started to work towards the target of six hours and at the end the bike course was completed in 5:50:42.

“My legs felt good, very good so I just kept going. My mind played the principal role, keeping me strong and looking forward to the end of the race.

“Breaking the bike course down helped. It was about 25km to the start of first lap, mainly up the hill, then three laps of 45km with very rolling roads but nothing exaggerated, and the way back was easy downhill and flat. After the first of the three laps, I was checking where (and where not) I could go hard to spend less of energy and tire me unnecessarily.

“Being smart on the bike course made the run go well.”

The marathon… you mentioned a bad bit, how did you overcome it? Did you ever think you would not make it?  “This was my first marathon ever in my life, after 4km swim and 180km on the bike the first 27 km of the run felt quite easy. But after that… not so good.

“The dream of completing an Ironman was just around the corner and that’s what kept me going and not stopping until I got it.”

How happy are you with 11hrs 4 mins? “What to say, I was doing my maths for a long time and always I was saying to complete it in 11-12 hours. So I was very, very happy with the time achieved.

“I already knew that the marathon was going to be the decisive point in my final time so I took some precaution saving minutes on the bike and the first half marathon.

Will you do another one? ”Yes! I will do and other one and soon. Next time I will try harder to go under 10 hours 🙂

And finally, tell us about your Ironman tattoo! “It is a tradition as a triathlete to have the symbol of Ironman tattooed, this will be accompanied by the symbols of a swimmer, a cyclist and a runner.As it is not my first tattoo, I have to have one as one of the biggest achievements of my triathlete career.

Thanks Ruben, congratulations, what an amazing achievement and an inspiration you are. 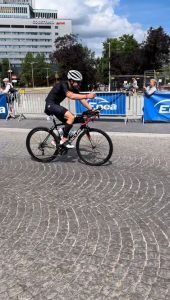 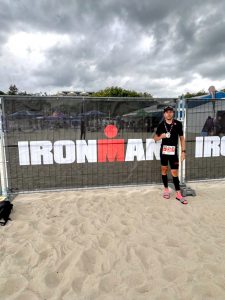 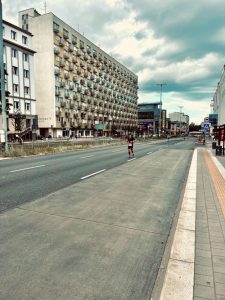 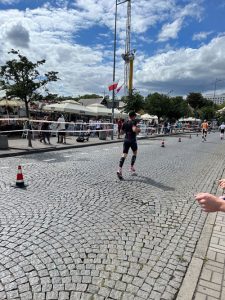 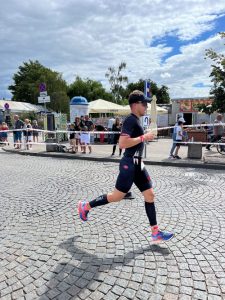 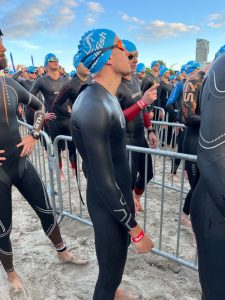 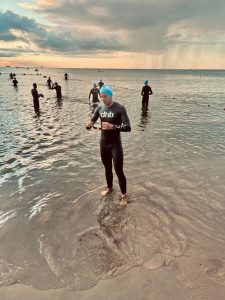 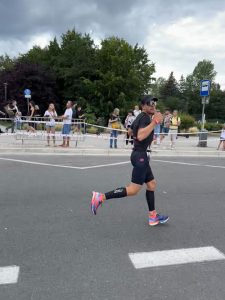 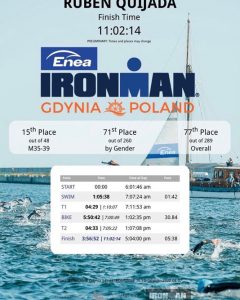 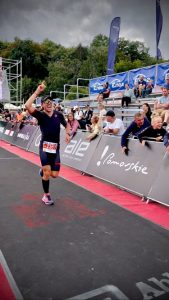